You always knew there was something fishy about Snow White's story, didn’t you? Seven lusty men. One young, nubile woman. Living innocently together in a cottage in the woods.

But life ain't no fairy tale.

Now Bitchy, the eighth dwarf, tells the real story of Snow White and it's nothing like you imagined. Or maybe it is.

Short stories are not my forte. I can't plan a short story. It has to be inspired by something. This story was inspired one day when a coworker walked in with something that had an image of one of the seven dwarfs on it. I was not having the best day, so I took one look at that image and said, "I'm Bitchy, the eighth dwarf." That's all it took to get me to start thinking about what the story would be like if there really had been an eighth dwarf.

You may have noticed that this story is told in first person (the I voice) from Bitchy's point of view. So far, it's the only story I've written that's told in first person. I didn't make a conscious decision to write it this way. I just started writing it and somewhere along the way I noticed Bitchy was telling this story her way. It worked, so I went with it.

Everyone thinks she’s so kind and sweet. So innocent. A princess.

She’s a princess. They’re right about that part, but not the way they think.

People think what I have to say is a case of sour grapes. They won’t even listen because they don’t believe I was there. They think what they’ve heard is the whole story. Ha! The Crown wanted a fairy tale about the prince’s bride-to-be. The story is salacious enough—a princess living in the forest with seven dwarves—they didn’t want to deal with the story the way I told it, so they brought in some public relations people—first the Grimm brothers, then that chap Walt—both of whom wrote me out of the picture. But let me make this clear right now: just because Doc and Grumpy and all the rest are dwarves, that doesn’t mean they aren’t men.

Yeah, if Snow was innocent when she came to stay with us (of which I have my doubts), she wasn’t innocent when the prince came along.

So who am I that I know all about this? I’m the one you haven’t heard about. I’m the eighth dwarf, Bitchy. And until Snow came into our lives, I had a pretty good thing going.

Yes, I did all the cooking and cleaning and laundry—and these boys are pigs. True, they can’t really help it. You can’t stay clean when you work in the mines, although all that silver dust is kind of pretty.

I worked hard, but it had its rewards. And I don’t just mean the deal where I get to keep whatever I find in their pockets when I take their clothes down to the river. (Between the silver dust and the occasional nugget they forget in their pockets, I do okay for myself.)

I was their woman. They worshiped the trail of silver dust I walked on.

Until Snow showed up.

For the most part, Snow’s story starts the way you’ve been told: Snow’s mother—not her stepmother—was a vain, jealous woman, an unnatural mother. Of course, Snow’s father’s kingdom isn’t known for producing raving beauties. The people are generally short and swarthy. Snow’s mother, who came from some distant kingdom I can’t even pronounce, was from a fair-skinned people. Not exactly a beauty herself, but her paleness made her an exotic creature in Snow’s father’s kingdom.

The huntsman told me Snow was a chubby child. I bet you hadn’t heard that. It wasn’t generally commented on. (Heaven forfend that anyone perceive the royal family as anything but perfect.) To be fair, she’d lost the baby fat by the time she stumbled into our neck of the woods. She wasn’t beautiful by any means, but she was comely enough, if not very bright.

Of course, if her mother had two brain cells to rub together or even a modicum of normal maternal feelings, she would have married Snow off the first time her magic mirror told her Snow was the fairest in the land. Once married, off she would have gone to her husband’s kingdom, handily getting her out of the land.

No Snow. No problem.

But of course, that’s not how it happened, Snow’s mother being not just stupid but psychotic as well.

So off Snow went with the huntsman.

I’ve met the huntsman. A paragon of sympathy he ain’t.

Despite the official version, how Snow got away from him is still the subject of wide conjecture. My personal opinion is she traded favors with him. Since she had nothing of value on her person, I’ll let you figure out what she had that he might have wanted enough to risk the queen’s wrath.

Snow may not be the sharpest knife in the drawer, but she had enough sense not to return to the castle. The huntsman spared her, but was that really a kindness for a castle-bred girl whose idea of feeding herself started and ended with the strenuous exercise of lifting a spoon to her lips?

She stumbled through the forest for three days before she found our cottage.

The boys were washing up outside as I require them to do before they sit down for supper. It stormed earlier in the evening, and when she walked into our little glade, she looking like something someone had tried to drown in a muddy rain barrel. Grumpy took one look at her and suggested they finish the job.

Some folks say I haven’t an ounce of sympathy in my soul, but I overrode Grumpy’s objections and brought her inside. (I’m Bitchy, not heartless.)

Slowly, as I dried this water-soaked girl, washed the mud from her face, and picked the twigs from her hair, this forest urchin began to transform into a comely maiden. (Well, maybe not maiden as that implies certain virtues, which may or *cough, cough* may not have survived the huntsman.)

Doc, who’s somewhat the leader of this pack—actually, just as deer come in herds and birds in flocks, a group of dwarfs is an obstinacy—so as the unofficial leader of this obstinacy, Doc stepped forward and did the honors, introducing us all. When he finished, we waited for her to do the same. We waited so long we began to wonder if she was a mute, but finally she stuttered out her name.

Now we may not be anywhere near the center of the known universe, but even we had heard about the sad demise of the young princess. The entire kingdom was in official mourning. To say we had our doubts that she was who she claimed to be would not be an exaggeration. Grumpy, ever the skeptic, advanced the theory that she was working some kind of scam to separate us from the hoard of silver. The others were skeptical of his skepticism, especially after Snow explained about the huntsman (whose nature we were ignorant of as we had yet to meet him.)

I won’t say she was all that convincing, but I believed her. She had that helpless princess thing going on, and I just knew she wasn’t going to make my life any easier. Not to mention that life had been going on rather smoothly for a while, so I figured we were due for some turmoil, and what could more tumultuous than her story being true?

Eventually, the boys accepted her story as well, but I suspect, even today, that the biggest factor was their desire to believe her. They looked at her and saw a young, attractive woman—a desirable woman. One whose eyes begged them to be her salvation. They bought it because she made them believe they could be the heroes of her story. 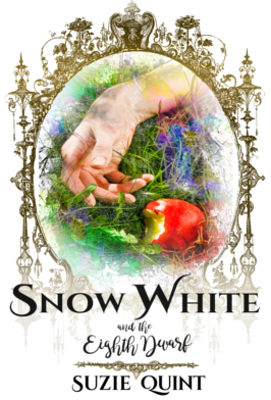