Cleo Morgan is a liar.

And they’re not little, white liars but big, black whoppers. She’s lying to everyone in her hometown, letting them believe she still works for a reputable paper when, in reality, she’s sold her soul to The Inside Word, a tell-all supermarket tabloid no one wants to admit they read.

She’s lying to Alec Ramirez, the tabloid’s star reporter, who is training her to write their kind of story their way. He doesn’t know the woman who’s been arrested for murder in the story they’re covering is her mother. Or that Cleo is conspiring with her old boyfriend to steal that story out from under him and using it to buy her way back into her old life.

And she may be lying to herself that leaving Alec behind when she goes will be easy. Because she absolutely, unequivocally, beyond the shadow of any doubt does not want him in her life on a permanent basis.

Why in the world did I ever take on writing a mystery? I'll tell you, I sweated the mystery in this. And if you didn't know who did it until the end, well, that's probably because I didn't know very much ahead of you.

Mystery writers have my utmost respect. They have to keep all those balls in the air. The mystery has to be complex enough that it's not obvious who did it but the cover up can't be as airtight as it initially looks. The clues have to unfold in a logical way that keeps the characters moving forward but they can't reveal the answer too quickly. When the final clue lays down, there has to be a logical reason why it didn't come out before. The author has to keep in mind what the detective thinks happened, what really happened, and how the perpetrator covered it up--and how they screwed up their cover up(in a way that won't be revealed too soon or too easily.) To top all that off, they have to tell the story so it holds together when you go back and read it again.

If I ever say I'm writing another story with a mystery subplot, will someone please shoot me and put me out of my misery?

I got lazy and the book Alec reads from is a passage in another one of my books. Context really is everything.

Twenty-four hours ago, Cleo Morgan would have agreed with them, but this wasn’t going to be an ordinary press conference. This time, she’d cringe over every question the reporters fired at the D.A., every textbook, evasive answer, waiting  for some bomb to drop that would rip open her heart. Because the person they’d arrested for the murder of high-rolling, Las Vegas casino owner Sebastian Koblect was Annaliese Carson.
Cleo’s mother.
Cleo wasn’t normally prone to claustrophobia, but the powers-that-be had picked one of the smaller rooms in the Clark County government center. They should have known better, Cleo thought as the man in front of her stepped back unexpectedly, forcing her to fall back to keep her toes from being trod on. Sebastian Koblect’s death was national news; therefore, so was the arrest four days later.
Half a step into her retreat, she came up against a solid, male chest. The chest belonged to Alec Ramirez, her colleague at The Inside Word.
“How you holdin’ up?” he murmured into her ear.
“It’s too warm.” Her underarms were slick with perspiration.
“Too many people in here,” he said.
Ya think? was on the tip of her tongue, but she bit it back. He was only trying to be supportive. Logically, she knew it wasn’t his fault that half the time he annoyed the shit out her. She understood the reasons behind that: he was the star reporter at a tabloid, which represented everything she didn’t want to be but was on the road to becoming.
It was the other half of the time that was inexplicable. The moments when she wanted to kiss him senseless and ravish him to within an inch of his life. Or better yet, have him ravish her.
Not that she’d been in a ravishing sort of mood since the arrest the previous day. Which only made Alec look even better since he’d spent last night holding her as she slept. Yeah. Saint Alec. Who’d a thunk it?
The last thing she’d expected when she’d accepted a job at a tabloid was to find a man like him. Smart, sexy, principled, even funny sometimes. He was also annoyingly tenacious, righteous in his defense of his employer, and had a nose for a story. How she’d gotten away with all the lies she’d told him—like the one that Annaliese wasn’t her mom—now that was a miracle.
“You holding it together?” Saint Alec asked.

She nodded, but it was a lie. She was holding it together only because she’d wrapped all her emotions in cotton batting and shoved them down a deep well.
A stir started near the front of the room, and moments later, the district attorney took the podium. He ignored the TV cameras and, after introducing himself, thanked the police and the state forensic lab for their investigation which led to this quick arrest.
Here it comes. Cleo took a deep breath and held it.
“After questioning, Annaliese Carson was arrested and is currently being held in the Clark County jail,” the DA said to the crowd of reporters. “Annaliese Carson, forty-five years old, is being charged with the first degree murder of casino owner Sebastian Koblect. Ms. Carson is a former showgirl and is currently employed by El Dorado Casino as a choreographer. No bond has yet been set. Because this is a continuing investigation, we will not be able to release specific details of this case.”
After his statement, he took questions, warning them again he could discuss few details. Several reporters called out questions, but a man’s voice—one Cleo recognized and had dreaded hearing—rose above the cacophony, as if he was entitled to a response. “How well did the suspect know the victim?”
Cleo wished she could disappear or at least hide behind Alec, but that would risk drawing attention.
“Ms. Carson has been an employee of the casino for more than twenty years,” the DA said. “She has allegedly had a long and volatile relationship with Mr. Koblect.”
“Volatile?” Cleo whispered, shocked out of her desire to hide, nearly shocked out of the cotton batting she’d tried to wrap around her emotions. “No.” The choice to characterize Annaliese’s relationship with Sebastian as volatile told her too clearly that the case was going to turn into a circus freak show with Annaliese cast as the star freak.
Alec gave her shoulder a sympathetic squeeze. She twitched, wanting to shrug it away, wanting to deny the need for it, but sympathy was going to be a rare commodity in the coming weeks.
“Don’t throw the switch on her yet,” he murmured. “Not until you’ve talked to the lawyer.”
She closed her eyes and took a breath, silently thanking him for the reminder.
The district attorney left the podium, and people started moving toward the exits. With Alec at her back, Cleo held her ground and let the crowd move around her.     Where was Annaliese right this moment? Visions from every prison movie she had ever seen crowded her mind. She wanted to believe the county jail was different, but she didn’t have any images on tap to back up that hope.
“Cleo.”
It was the same voice that had asked the question earlier.
She should have let the crowd sweep her toward the exit.
“Martin,” she said flatly as she turned toward him.
Sun-bleached hair, perfectly capped teeth, and an expensive casual suit. That was Martin Howard Prescott the third. One of the star reporters at The Tucson Sun, the paper that had hired her when she’d offered them the exposé she’d written that had eventually netted the paper a Pulitzer nomination. Until a few short weeks ago, when she’d handed in her notice there, Martin had also been her lover.
Was it odd she missed The Sun more than she missed him?
Alec’s hand tightened on her arm. “Buck up, Princess,” he whispered in her ear. “Put on your smiley face.”
His support was suddenly annoying because it reminded her of another secret she was keeping from him. Lies, lies, lies. It seemed as if that was all that came out of her mouth these days. She restrained herself from digging an elbow into his ribs, but his suggestion was exactly what she needed to stiffen her spine.
She forced a smile. “Martin,” she said again, sounding less like he was a member of a firing squad.

“So he’s crap in bed,” Alec said. “Good to know.”
“What is this fixation you have with his sexual performance?”
“So he wasn’t crap?” He stole another fry. “You had lots of screaming orgasms with him?”
She narrowed her eyes at him. “I’m not really a screamer.”
“Maybe not yet.” The corners of his lips tilted up. “I could fix that.”
Cleo rolled her eyes.
“So no screaming orgasms with Marty. Did you have any at all with him?”
“Yes. Of course I did.” She let a hint of a smile touch her lips as she picked up the catsup bottle, flipped the lid open, and poured a puddle on the edge of her plate. “But maybe not as many as he thinks.”
It was Alec’s turn to choke. After a couple of coughs, he said, “You faked your orgasms?”
She gave him a “well, duh” look. “Any woman who says she’s never faked an orgasm is lying.” He looked as if he was about to protest, so she said, “And please don’t say no one’s ever faked one with you. Let’s not have a Harry-Met-Sally moment because it doesn’t always have to do with how competent the guy is in bed.” Her own sexual deficiencies notwithstanding, growing up as Annaliese’s daughter, she’d been exposed to a lot of graphic conversations among the showgirls that backed up her opinion.
He didn’t look convinced. “Oh? What does it have to do with?”
“Sometimes we’re not in the mood, but we still want to please our guy. Sometimes we’re in the mood, but we lose it somewhere along the way, and we know it’s not going to happen. Sex takes a lot of effort when you’re not ‘feeling’ it, and we get tired and want to move things along.” She shrugged. “So we fake it.”
“You’re shattering my illusions but, you know,”—he wagged his half-eaten fry at her—“this might make an interesting story. Why Women Fake It and How to Tell.”
“Yeah.” In her mind, she could actually see the banner headline. It was exactly the sort of thing she expected from a tabloid. “Good luck with the last part.”
“Not going to share the trade secrets, huh?”
“You don’t really want to know. Besides, every woman’s different.”     “I have noticed that.”
She’d bet he had. He had enough of a bad boy way about him that women probably fell at his feet everywhere he went. Lord knew it hadn’t taken her long to start having hot, steamy, lust-filled fantasies with him in the starring role. 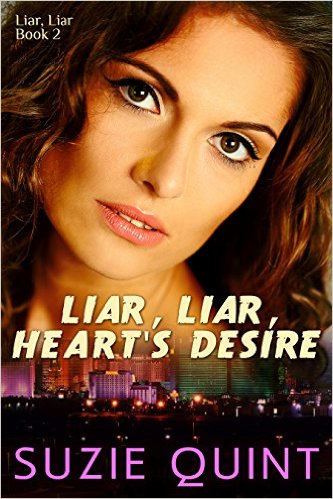