Young and stupid go together like peanut butter and jelly.

Sol McKnight, rancher and rodeo bull rider, married Georgia Carston, the love of his life, at eighteen. So maybe they were too young and maybe he was stupid to believe it would last forever because six weeks later, she left him.

Now she’s back in Hero Creek for the summer. This is his chance to win her back. Little does he know, this may be his last chance because Georgia has her eye on the divorced father of their daughter’s best friend. If Sol ever wants to feel whole again, he’s going to have to figure out what went wrong so many years ago and fix it. If he doesn’t he’ll lose her forever.

This is the easiest story I've ever written. It was like Rachel and Mac were standing behind me while I typed, telling me how their story went. All I had to do was transcribe it. I wish they were all that easy.

“What are we doing?” Mac asked as Rachel fed a dollar bill into the jukebox and started punching numbers. Claudia knew Rachel’s taste in music and made sure it was on the bar’s jukebox.
“You’re going to learn the Texas two-step,” Rachel said as the first notes of “Beer For My Horses” by Willie Nelson and Toby Keith started.
Mac chuckled. “You think you’re going to teach a man who doesn’t know his right foot from his left how to dance?”
She punched in the number for “Whiskey River” by Willie Nelson before stepping to the edge of small dance floor. “Come here.”
“Do I get to hold you?” He leaned against the end of the bar, his arms folded across his chest, his expression dubious.
“Yes.”
“Close?”
She was proud of him for not leering, but the deep gleam in his eyes made her heart skip a beat. Down, girl. That’s just a reflection of the bar’s lighting.
“If you get good enough.”
He grinned as he pushed off the bar. “What are we waiting for then?”
“The steps are quick-quick, slow, pause.” She placed his right hand on her waist. “Start on your left foot.” Rachel put her left hand on his shoulder, her right hand in his. She took a steadying breath and looked straight ahead at his chest, pretending the hand at her waist belonged to one of her brothers until it no longer made her feel unsteady. “Ready?”
He promptly stepped on her foot.
“Your left foot, you lumbering ape,” she snapped. “Over here.” She rattled their clasped hands. Snarling at him felt good, as if she were in control of the situation. She pretended his hand wasn’t burning a hole in her back and making her knees wobble.     They started again with her directing the steps like a square dance caller. “Quick, quick, slow, pause—Pause, dammit!” she swore when he stepped on her foot again.
“Then how do I get back on my left foot to start again?”
“You don’t. You step into it with your right to keep the rhythm.”
“You didn’t tell me that,” he said resentfully.
Laughter echoed in the empty bar, startling Mac into stepping on her foot again. She shoved him off.     Rachel’s brother leaned against the wall by the door, a big grin under his gray cowboy hat. “I ain’t seen nothing so damn funny since Billy Ray Cyrus on Dancing with the Stars.”
“God spare me that,” Rachel said. “This is Claudia’s brother, Mac. Mac, this is my brother Jacob.”

“Jake,” her brother corrected as they shook hands.
“Jake’s taking some summer courses at A&M Galveston,” she said. “He’s agreed to help teach you how to dance.”
“You didn’t tell me he was another Billy Ray,” Jake complained without rancor.
“I didn’t know, okay?” Her attempt to keep her irritation out of her voice was only partially successful.
“I take it that’s bad,” Mac said.
“Very bad,” Jake assured him. “Asking a dancing bear to tango wouldn’t’ve been as painful to watch. Let’s see if you can overcome it.” Jake dropped his Stetson, brim up, on one of the tables and offered Rachel his hand. “Let’s show him how it’s done, Sis.”
They stepped off together, in perfectly synchronized step. It was as simple as a cake walk with Jake. How could Mac not feel the rhythm?
After the first circuit of the dance floor, Jake spun Rachel under his arm. She came back into his arms, facing the same direction, her arms crossed beneath her breasts, her fingers curled around her brother’s. Jake spun her again then went under her arm, as smooth as ball bearings.
“That’s pretty,” Mac said as they finished their third circle of the dance floor.
“It’s easy once you got the basic steps,” Jake said.
“When do I get to hold her close?”
“When I don’t have to worry about you stepping on my feet,” she snapped.
Jake just grinned. “How close do you want to hold her?”
“Close.”
“Show me,” Jake said.
With some trepidation, Rachel took the opening position with Mac. He slid the hand on her waist around to the small of her back and pulled her snug against him. At the intimate feel of him, a strange bubbly sensation, as though she’d swallowed an entire box of Alka-Seltzer dry, hit her low in her stomach. She wanted to step back, but his hand held her too firmly.
“You want me to teach you how to screw my sister on a dance floor?” Jake’s tone was noncommittal, but his voice seemed to have dropped about half an octave, as though prepared to take Mac apart if Mac’s answer didn’t please him.
“Uh, well, not your sister specifically,” Mac said, his expression a little sheepish.
Rachel’s face felt hot as a branding iron, and Jake’s laughter rang out again. “Any guy who can make my sister blush like that deserves some kind of reward.”
Mac’s grip loosened as he pulled back to look at her face. She took the opportunity to step away from him.
“If you two are through bartering like a couple of polygamists looking for a third wife—”
“Don’t get your knickers in a knot, Rach,” Jake said as he stepped behind the bar and got himself a long neck Lone Star from the cooler. “What’ll you have, Mac?”
“Chivas on the rocks.”
Jake pulled a bottle from the shelf, filled a rocks glass with ice and set both on the bar.
“What do you think you’re doing, Jake?” Rachel asked.
“A little lubrication might help Mac relax enough to keep him off your toes. Unless you want to be limping tomorrow?”

Rachel surrendered. She didn’t have any better ideas. “Fine.” She’d settle with Claudia later.
“If you want one of those complicated Bloody Marys, Rach, you’re going to have to make it yourself,” Jake said.
“I’ll take a red beer.”
Mac poured a couple of fingers of Scotch into his glass as Jake tapped the beer. When Rachel had it in her hand, Mac lifted his glass in a toast. “To the Texas two-step.” With a grin, he added, “And to screwing pretty girls on a dance floor.”
Jake hoisted his beer as Mac opened his throat and poured his Scotch straight down.
Rachel shook her head. “A waste of good Scotch,” she said, pretending it didn’t sting that Jake couldn’t imagine someone like Mac taking her seriously enough to take umbrage at Mac’s toast.
“Not if it helps him learn, it ain’t,” Jake said, his eyes on Mac, friendly and approving. “That juke got any Brad Paisley on it?” he asked Rachel.
“I’m sure it does.”
“Play some.”
Rachel held out her hand. “Give me a buck.”
“Hey, this is your party,” Jake said. “You supply the music.”
With that logic, it was really Mac’s responsibility. Rachel held out her hand to him. He shook his head ruefully but dug out his wallet to give her three ones.
“Start with ‘Make A Mistake’ if it’s on there,” Jake said as she scanned the listings.
“Is that a good dance tune?” Mac ask behind her.
“It’s all right.” She could practically hear Jake’s shrug in his voice. “I just like the song.”
Rachel found it and punched FF06. She followed it with Waylon’s “This Time” and Willie’s “On the Road Again,” choosing them for their solid danceable rhythms and because she liked them.
“I hope you really want to learn to dance,” Jake said to Mac behind her.
“Yeah. I do.” Mac’s tone was hesitant, as though he wasn’t sure at all. “Why? Is there something more to it? Some secret handshake or something?”

“No, it’s just Rachel don’t do nothing by half measures. And she’s . . .”
Rachel tilted her head, trying to catch Jake’s suddenly lowered voice.
“. . . kinda bossy.”
Jake’s opinion didn’t surprise her, but that he felt the need to warn someone—a stranger—hurt her feelings a little. Not that she’d ever let on.
Mac’s laugh boomed across the room. “Well, yeah.” He didn’t seem to care if she heard. “But at least I never have to wonder what she’s thinking. You have no idea how nice it is not to have to read a woman’s mind.”
At least someone appreciated her. Even if it wasn’t quite the defense of her character she would have liked. She punched the number for Jerry Jeff Walker’s “Mr. Bojangles” and turned back to the men. “You ready?” she asked Mac.
She had begun to think she’d found Billy Ray’s twin when, a couple of Scotches later, the steps suddenly clicked for Mac. Rachel found herself moving easily across the floor, his arm comfortably around her.
“Who says you can’t teach an old dog new tricks?” He grinned down at her, pleased with himself. Inordinately so, in her opinion, but since he wasn’t stepping on her feet, she decided to be magnanimous and not burst his bubble.
When Jake was satisfied Mac had a few turns down well enough that all he needed was a chance to practice, he picked up his cowboy hat and settled it on his head. Just before he let himself out through the iron gates, he touched two fingers to the brim and said, “Welcome to Texas, Mac.” 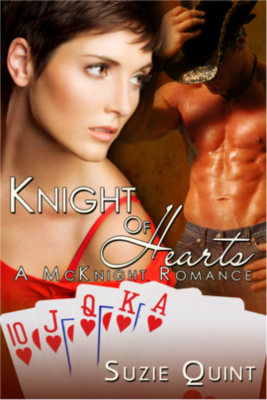 Top
We use cookies to ensure that we give you the best experience on our website. If you continue to use this site we will assume that you are happy with it.OkNo