A Knight in Cowboy Boots

She's on the fun from a killer. Can a cowboy save her life... and her heart?

Maddie Wells never planned on being a guardian. But after her sister endures an unthinkable tragedy, Maddie and her nephew skip town to start over. She hopes that Galveston, Texas will be far enough away to keep her sister’s killer off their trail…

Zach McKnight couldn’t wait to get back to the ranch. He thought nothing could beat getting off the rig and heading home until he laid eyes on the new raven-haired beauty in town. But as he starts to fall for Maddie and her child, he realizes that some of her stories just don’t add up…

Maddie can’t resist the roughneck cowboy’s seductive drawl, but she’s not sure she can tell him the truth. When her past comes back to haunt her, will their chance at love be lost or will it bloom like a Texas rose?

This is the first book of the McKnight series, but it's not actually the first story I wrote about the McKnights. I'm not sure whether that one will ever see the light of day. We'll have to wait and see.

The McKnights came into being because I'd been told in my writer's group that my characters all sounded alike. They had my grammar, my vocabulary, my way of speaking. So I set about trying to figure out how to write characters who didn't sound like me. That quest led me to studying regional dialects. I found I could hear the East Texas dialect in my head, which made it much easier to write. All that looking at dialects also changed the way I chose the words I used to tell the story.

“Let me get that there drink for the lady, Pete.” Mr. East Texas Drawl stepped up to the bar. “That is, if the lady don’t mind?”
She turned her head cautiously, afraid moving too fast would blur her vision.
Mr. East Texas was watching her, waiting for a cue his offer was welcome.

Maddie cleared her throat. “Thank you.”  Oh, crap. She sounded all Marilyn Monroe breathy.
He handed the bartender a ten. Maddie expected him to pull up the next barstool. Instead, he shoved it over with his foot and leaned one elbow against the bar. “So what’s a nice girl like you doing in a place like this?”
Maddie laughed. It should have sounded old, trite, and corny, but nothing said in that drawl could sound anything but enchanting to her. Her laughter lit something deep in Mr. East Texas’s dark eyes. Maddie suddenly felt warm. Sitting-in-front-of-a-raging-fire-on-a-cold-winter-night warm. The flutter in her heart moved into the pit of her stomach.“Don’t tell the bartender, but I’m casing the place to see if I want his job.” Maddie said, keeping her voice conversational. The bartender’s eyebrows rose, but he didn’t comment. He’d no doubt seen this dance often enough.
“Ah, well. Looking for employment. That’s respectable then.” Mr. East Texas nodded sagely. “Though I gotta admit, I was hoping you was here for less reputable reasons.”
“You mean like looking for a man to take me away from all this?” Maddie’s open-handed gesture included the entire bar.
“Even the best watering holes have a long tradition of that sorta thing. Why, my daddy met my mamma in a place a lot like this.”
Maddie fought to keep a grin from breaking out across her face. How long had it been since she’d engaged in light-hearted banter, never mind flirting? It seemed like eons.
“Really?”
“Well, maybe there wasn’t as much brass and mirrors. Or the selection of beverages this fine establishment has. And there ain’t no straw on the floor nor fiddle player in the corner…” He looked away as though seeking a fiddle player. “And they had dancin’.” His nostrils narrowed with an indrawn breath. His eyes came back to hers. “Damn. A man oughta take a woman dancin’.”
The flutter in Maddie’s stomach moved lower.
“What kind of dancing do you do to fiddle music?”

“The spirited kind.” He let a beat pass before he continued. “But I think you’re the kinda woman a man takes slow dancin’. Someplace where there ain’t much light, so’s nobody’d see when I kissed you.”
He held her eyes, waiting for her response.   Someone down the bar hollered for Pete’s attention and he moved away. Their audience gone, Maddie swiveled on her barstool to face him straight on.
“What if I didn’t want to be kissed?” she asked, knowing her body language sent a completely different message.
“Why, ma’am . . . ” He leaned slowly closer as he spoke. “I don’t think I’d ask first.” His lips brushed hers lightly. Just a gentle touch, as though she’d been kissed almost in passing. He pulled back, but only a couple of inches. Neither of them had closed their eyes.
Maddie swallowed, trying to work up some moisture in her suddenly dry mouth.
“My daddy says sometimes it’s better to ask for forgiveness than for permission.”
“Does he?” Maddie forced out.
“Oh, yeah.” His tone was heartfelt. “And I think I may need a passel of forgivin’,” he said just before he kissed her again.

A Knight in Cowboy Boots

is available in the following merchants: 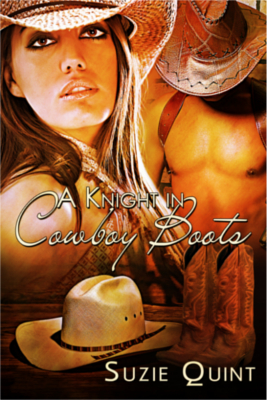