Young and stupid go together like peanut butter and jelly.

Sol McKnight, rancher and rodeo bull rider, married Georgia Carston, the love of his life, at eighteen. So maybe they were too young and maybe he was stupid to believe it would last forever because six weeks later, she left him.

Now she’s back in Hero Creek for the summer. This is his chance to win her back. Little does he know, this may be his last chance because Georgia has her eye on the divorced father of their daughter’s best friend. If Sol ever wants to feel whole again, he’s going to have to figure out what went wrong so many years ago and fix it. If he doesn’t he’ll lose her forever.

I did a lot of rodeo research for this on. Specifically bull riding. Ty Murray"s book, Roughtstock - the Mud, the Blood, & the Beer was a lot of help, as was Professional Bull Riders: the Official Guide to the Toughest Sport on Earth.

I really tried to get Georgia to lighten up and see the humor in things, but she was so focused on being a good mother, it made her more serious than most of my characters. It didn't help that her mother was "difficult." Fortunately, she had a grandmother who was a hoot.

As he came up behind her, he saw she had some creamy, chick drink on ice in front of her. He propped one cowboy boot on the bar’s brass foot rail, braced a forearm on the bar, and leaned on it. Without greeting her, he picked up her glass between forefinger and thumb and took a sip. “Whoa!” He ran his tongue across his lips, sucking a stray drop from the fine hairs of his mustache. “Tasty way to drink whiskey.” Not quite the chick drink he’d expected.
She didn’t look surprised to see him. “That’s not whiskey. It’s Baileys Irish Cream.”
“Honey, I know whiskey when I taste it.” How could she not know she’d been drinking whiskey? “You put it in a milkshake, it’s still whiskey.” Sol studied her, evaluating. Georgia had never been a big drinker. She didn’t look drunk now except for the sheen in her eyes, as if they weren’t focusing quite as well as they should. “How many of these have you had?”
“A few.”

His erection got stiffer. Opportunistic Bastard. If he let her drink a few more, she’d be easy to get into bed. “Okay, it’s not whiskey,” he said, happy to humor her. “Let me buy you another.”
“It’s not whiskey. It’s a liqueur.”
“I ain’t arguing with you.” He gestured to the bartender. “Tommy, get the lady another. On me. And get me a barley pop.”
Tommy brought a Lone Star with Georgia’s Baileys. “When did you start drinking those?” Sol asked as he watched her take a sip.
“About a year. A guy I dated introduced me to it.”
A guy she dated? Fuck. “Pretty pansy drink for a guy.”
Georgia’s eyes narrowed. “You think so?”
Sol took a swallow of his beer. “Yeah, I think so.”
Her foot slipped as she tried to stand on the brass foot rail, but she got it repositioned and leaned over the bar. “Tommy! C’mere.”
Tommy responded quickly, and Sol wondered if Tommy had been trying to make time with her before he’d walked in.
“I want two shot glasses, Tommy. Half Baileys, half Jameson’s Irish Whiskey.”
Sol’s eyebrow twitched as Tommy turned to make the drinks. “Shooters?”
She looked disdainfully at him. “Of course. You don’t sip out of a shot glass.”
“This concoction got a name?”
“A shillelagh.”
When Tommy put the shot glasses in front of them, Georgia threw hers down in one quick motion. Sol felt a smile trying to pull at his lips as he calculated how many it would take to get her loose enough to go home with him.
She looked up at him. Her beautiful baby blues sloe-eyed. Still glazy. “Come on, tough guy. You’re not afraid of little pansy drink, are you?”
“Nothing in a shot glass is a pansy drink,” Sol said, and he picked his up and threw it back. He licked his lips then rolled his lower lip up over the edge of his mustache as he peered into the empty glass. The sweet of the Bailey’s on the flat of his tongue and the whiskey burn on the edges made an interesting combination.
“Not bad.” He pushed his cowboy hat back on his head. “Tommy, set up a couple more.”
When the drinks were in front of them, Georgia reached for her glass, but Sol put his hand on her wrist. He held his drink up and waited for her to raise hers. “To women and horses . . . And the men that ride them.” Then he threw the drink down his throat. 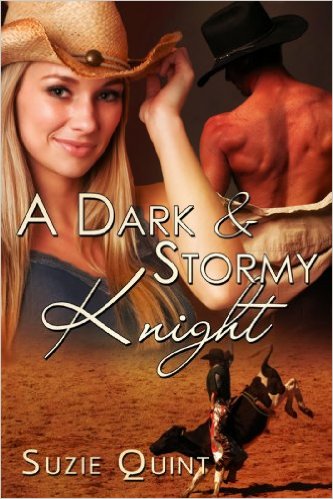